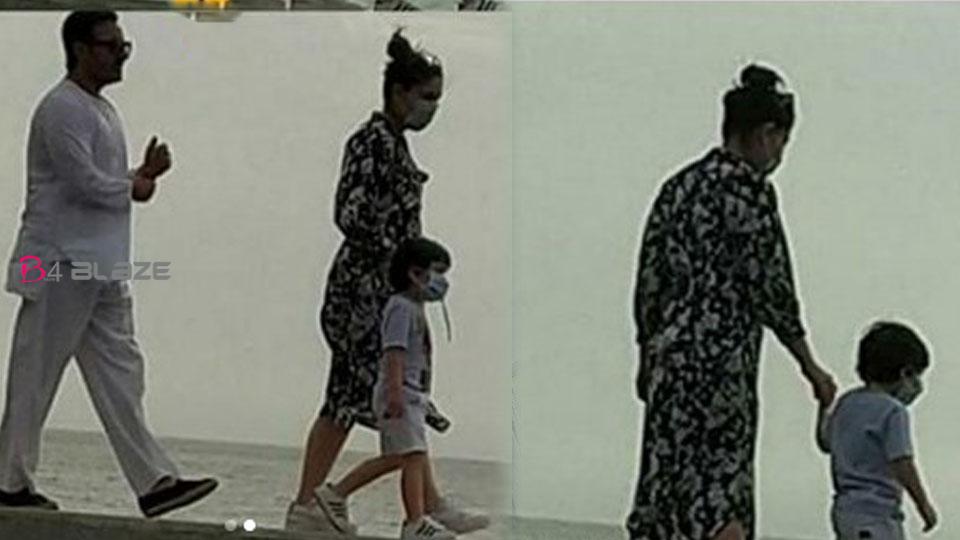 Sunday was a special day for actors Saif Ali Khan, Kareena Kapoor Khan and son Taimur Ali Khan. Fresh air out of the house and on the beach along Marine Drive, he was spotted walking. Kareena and Saif appeared with Timur for the first time after the lockdown. Their videos and photos are becoming increasingly viral on social media. But the shocking thing was that Saif Ali Khan was seen without a mask. Saif is now being trolled on this matter on social media.

Taimur holding the hand of Mummy Kareena is enjoying the waves on the beach. At the same time, Saif is seen following him with folded hands. The young Saif is shocked to see Ali Khan without a mask. He is commenting and asking where is Saif’s mask? A user is writing that oh well everything is normal, there is no mask, there is not even a corona in India, someone tell them that everything has not happened as of now. Many people are also making fun of Kareena’s weight gain.

#saifalikhan steps out with #kareenakapoorkhan and #taimuralikhan today at Marine Drive. This place has become the hottest spot for people who are now enjoying walks in the morning and afternoons. Cops have been controlling this place and they are not allowing anyone to sit on the promenade. … . Please note my images and videos cannot be posted on any platforms without my written consent. . 📷 Dipti Shah #viralbhayani @viralbhayani

Looking at Saif in the photo, it looks as if the corona in Mumbai is over and all things are normal again. Photographer Viral Bhayani has posted photos of Kareena Kapoor Khan, Taimur and Saif Ali Khan on Instagram, in which the trio can be spotted walking on Marine Drive. Along with this, Viral Bhayani has also given credit to Deepti Shah for these photos.

Talk about Kareena’s work front, she will be seen in Aamir Khan’s film ‘Lal Singh Chadha’. Kareena and Aamir’s first look from the film has been released. It is a Hindi remake of the Hollywood film Forrest Gump. The shooting of the film has been stopped for the time being due to Corona virus.

After the looks of Aishwarya Rai Bachchan-Karisma Kapoor and Kareena Kapoor, now Ranbir Kapoor’s Xerox copy viral on the internet

See pics: Sleepy Taimur goes with mom Kareena Kapoor Khan as the two are back in Mumbai

I don’t blame, credit anyone for my success or struggle: Kareena